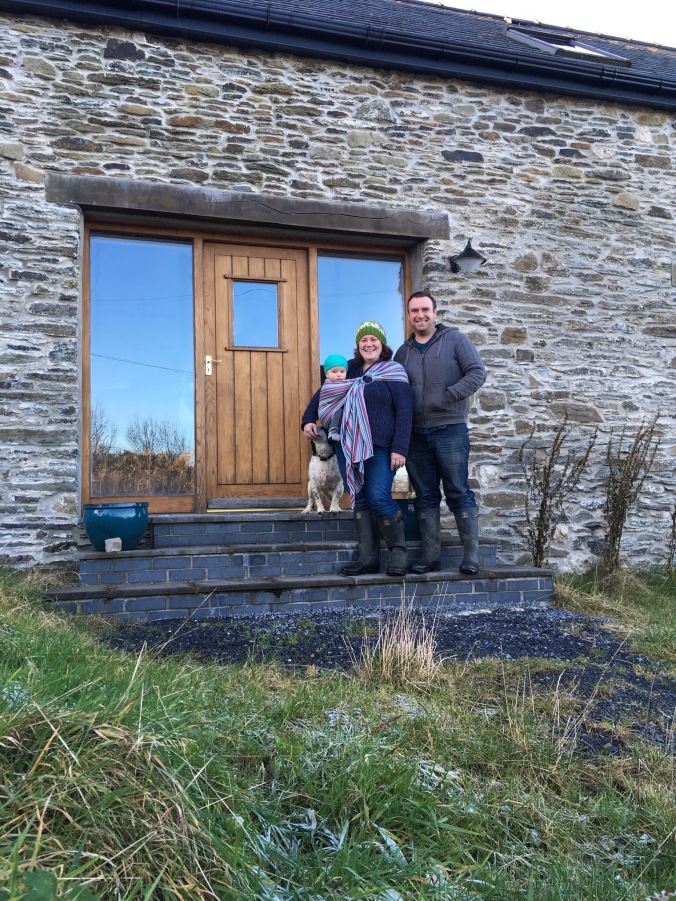 Been at least 2 months since my last podcast

We’ve been really busy….. Visitors at the farm in the form of my Dad, and James’ parents both twice!

Had a lot of stuff done round the place, but I’ll update you on that in the around the farm happenings at the end!
So on with Knitting!!

Both are knitted up in Tyddyn Bryn sock yarn, one is the rainbow colourway, the other in some leftover blues….

I’ve knit up three yes three Weasley Sweaters. The pattern is free on Rav and by Alison Hansel… One is for William in the toddler size, then one each for my niece and nephew for Christmas, so my nephew who is five has the medium child and my niece the small adult size…

I knit William’s first as per the pattern and need to sew up, after that I knit the niece and nephews in the round!! Yay no sewing up, just ends. Now I need to complete the Duplicate stitching on the fronts for the lettering…. Any suggestions for a good tutorial for me to watch to see how to do the lettering?! It’s a new thing for me to do!! Eek!!

I cast on last night for my next Xmas knit…. Some socks for Dad, using this cortina sock wool, which the lovely Jen from Owl About Yarn gave me. I’m not sure at the moment but I think for Dad and James it may be a bit thin…. And not so hard wearing… So I’m going to knit an inch or so then decide whether I hold the yarn doubled to knit slightly thicker socks….

Lots of Xmas knitting plans now over the next month but I obviously won’t be able to talk much about them in case the giftees are watching!!!

Cor I did this load of sewing AGES ago now….

I have finished the lounge curtains all hemmed and hung and everything!!!

I’ll try and insert a pic, otherwise look out for em in the photo segments!!

Ive managed to make two pairs of cord trousers for young sir… From the simplicity pattern I’ve shown you previously pattern number 1566. They fit him lovely in the largest size… So this is the last time I’ll use this pattern for him!! I have another pattern for joggers that goes up to age three I think which I’ll have to dig out!!

I’ve finished one set of dungarees using the simplicity pattern 1566.

Now William has a long body and shorter legs so I was a little trepidatious about the pattern working ok on him…. Especially as I didn’t have popper tape just my prom popper inserter…. So he has worn them twice…. And each time I feel I’m constantly redoing up the poppers right in the crotch…. So these are shelved now and will be used for small bean due in March!!! Who we have found out is also a boy!!

I have another pair of the dungarees cut out… In the brown cord… This time I think so he can wear them a bit I will sew the bottoms as trousers not poppered legs, which will give plenty of seam allowance to use at the crotch… It means they’ll just be on and off able as a whole garment but I’ll live with that!!

Plans on the sewing front include making up the pile of stuff I’ve got cut out, recovering the kitchen chairs, recovering cushions for the lounge… Then I’ve got loads of patterns and fabric stashed to work through!!
Acquisitions….

So…. Since my last Podcast…. And basically since we moved… I’ve obviously acquired all the Hayfield Bonus Aran to do the Weasley sweaters…. And enough t DK myself one after Xmas knitting is finished!! Which I probably won’t be able to wear till after the baby is born!!

I’ve been lucky enough to be able to make a flying visit to the lovely West Wales Wool Show in Narberth and the lovely Zoe of Pins and Needles and Jen of Owl About Yarn have been busy bees at various yarn shows, but we’re kind enough to take some time up north and visit a few yarn stalls for me!!!

Soooo my yarny acquisitions are:

River knits; mermaid, shroom, Indian giant squirrel and so what if I’m a pansy.

Mothy and the squid;

Mum has been busy knitting and shopping too!!

William and James have both had new matching hats!!! James has barely taken his off, William has made a game of removing his and running off!! Ahh toddlers!!!

Mum has sent me a couple of gifts too,

A lush apron dress which should continue to fit as an extra layer even as I get bigger!!

And a yarn goddess T shirt!!!

Both of which I think she got at Ally Pally where she went this year and did a couple of workshops!! I’m now waiting on her to visit so she can show me what she learnt… Double knitting etc!!!

I’m sure I’ve acquired a few other bits, but can’t for the life if me remember!!
Other crafty things….

So no longer just the podcast just knitting and stitching!!

I’m going to start including some of the other crafty things I’m getting up to.

I’ve been repainting and fixing a dolls house originally made by mainly Dad and a bit myself as a teaching resource, to make it into a barn for the small boy to play with….

I’ve started to make a sign for the front of the house…. I’ve planed and sanded a chunk of oak, which was part of the original barn roof, used my pyrography tool to burn the lettering for the name…. Realising about three letters in we have the longest house name in the world!! I’m now varnishing it many many times so it survives the weather up here!!

I’ve made little man his own workbench for the workshop so he can play while we get in with some things out there…. It’s one of those things I’ll gradually add to….
Cooking…

We had a load of apples to process so I’ve made apple jelly, stewed Apple, and apple cakes and scones!!

We grew an enormous marrow so I’ve made marrow chutney, using James Martins recipe off the BBC website!

I’ve made some chocolate caramel crackers and there is a blog post in TyddynBryn.com with the recipe!

I’ve made my own mincemeat this year for mince pies!! Using the Delia Smith recipe on the BBC website

Delia also came up trumps with a fab leek and potato soup recipe this month!! Well worth a go if you like soups!!
Shop update

No shop update this time but it’s something I’m slowly getting to!!!

I shall be putting a call out soon for test knitters for a few different patterns, keep an eye on Instagram and in the Rav groups etc for those!!

I am also trying to wind all the lovely alpaca yarn into skeins and get that into the shop, but so far each time I get the niddy noddy out a small human makes off with it or tries to help….

I am also working on a few other items for the shop…. But these will be hush hush till such time as I’m ready for a reveal!!!
Farm happenings!!

We have done LOADS!! I’ve done some more in depth blog posts recently over in tyddynbryn.com, and a photo story on here, but a quick run down is:

Built, furnished, moved stuff into a workshop in Barn one,

Built a polytunnel frame, which just needs some more base securing before its skinned out,

Planted a box and forsythia hedge

Had a ton of fencing done with gates and everything cos we are posh like that!! Lol.

Had the hedges cut

Cleared out and sorted side one of barn one,

Collected and processed some wood…. Loads still to go!!

Chickens!!! (If you missed the live hatching back at the end of September the video is in the Tyddyn Bryn Facebook group and one hatches at about 38 minutes or about then!!)

I hope you enjoy the photo story!!!

Tyddyn Bryn out and about

We have decided to try and go out and explore our local area as much as we can…. Which hasn’t been much yet…. But we’ll get there!!! So far William and I have started going to a Forest school toddler group and we have been to Poppit Sands for a wander and some lunch! Lovely beach!!

Thank you for watching!!

I hope you’ve enjoyed the podcast this time!! If you did please click the like button at the bottom and or leave a comment, I’ll try to reply in a timely fashion!!!

Show notes are going to be on the blog at tyddynbryn.com and in the Ravelry group….